Until 1951 a tall monument stood in the town square in Ballyclare marking the affection of local people for a nineteenth century doctor called James Cunningham. You’ll have seen it in many of the old photographs of the town. 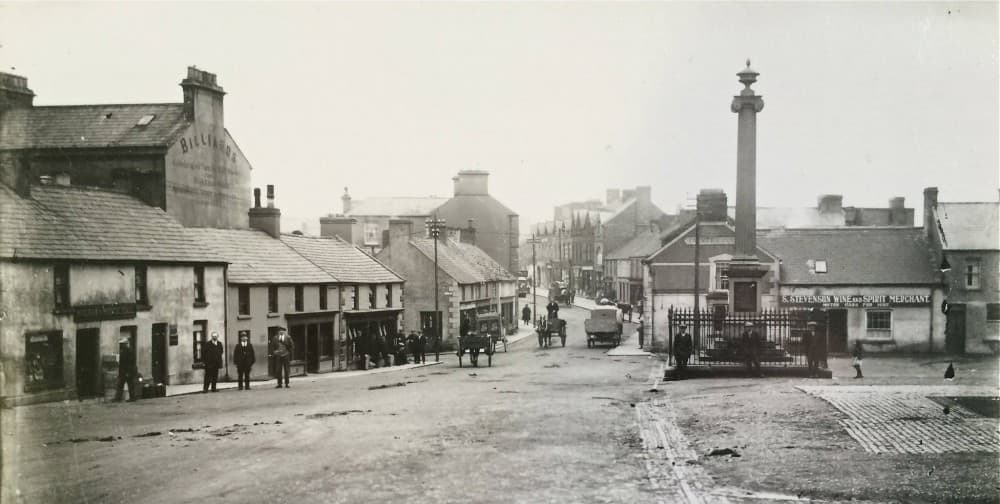 The handsome fluted column was erected in 1854 to the memory of the doctor, who had practised in his native town for over fifty years until his death in 1853, aged 71.

(In his book ‘By Lone Craig-Linnie Burn’ renowned local writer, Archibald McIlory paints a vivid picture of the good doctor whom he thinly disguises as ‘Dr Coulson’.)

On the base of the monument was a plaque that bore the words:

‘The lamented philanthropist whose memory this monument perpetuates was endowed with talents capable of elevating him to the highest eminence in his profession but he preferred remaining in his adopted town of Ballyclare, where he resided fifty years as a successful medical practitioner’.

The landmark monument was demolished in 1951 to help ease the growing traffic problem around the town, particularly from buses (no change there then). Before demolition however, the Council agreed to have the plaques at the monument’s base preserved and erected in the lobby of the Town Hall. This was not done and they were unaccountably ‘lost’. At the time, the Council had two tenders for the demolition, McGladdery's from Ballyclare who quoted £75 and Lusty's from Belfast who quoted £35. Ironically, if the monument hadn't been demolished, it would actually have been within the railings that are in place today.

In 2008, the office of Newtownabbey Council's Deputy Chief Executive, Hilary Brady suggested in a belated response to a letter in the Newtownabbey Times from William Cobain that, while no light could be shed on the whereabouts of the plaques, “it would be fitting to provide some modest memorial to Dr. Cunningham. He was a man who gave his expertise to his patients, regardless of their religion. That is why the locals respected him and erected a memorial in his honour". Needless to say, the modest memorial never appeared.

Such a shame that this wonderful bit of Ballyclare’s history, like so much else has been lost forever don’t you think?

And whatever happened to those German artillery guns that sat the top of the town?

Well, that’s another mystery for another day….