It was just 10 minutes after noon on Monday 12 June 1989 that an era of Ballyclare’s illustrious industrial history was raised to the ground in smoke and a magnificent landmark disappeared from the town’s landscape forever.

A crowd of over 200 people gathered that day to watch the demolition of the last remnants of the once-renowned Ballyclare Paper Mill, including its iconic 157 foot high red brick chimney.

As P4 teacher, Lydia Todd, reminisced on the day. ‘My grandfather was papermaker for the mill. He mixed the colours for the lovely paper we used to get in school. There were always big thick jotters of assorted colours of paper. I liked the pink and purple best and you had to keep writing to get to it, because it was always at the back. The exercise books actually said Ballyclare, County Antrim on them. The mill’s been there all my life. I think there were over 500 people employed in it at its peak and as far as I know it was the biggest paper mill in England, Scotland, Wales and Northern Ireland.’

Masterminding the operation was a man who had been demolishing chimneys and church spires for over 30 years, TV’s Fred Dibnah, from Bolton, near Manchester.

‘We’ve been cutting away at the base of the chimney for two days, using a compressor and a jackhammer,’ Fred explained. ‘Then we propped it up with wood. The idea is that when the fire’s lit and the wood burns through the chimney comes down.

‘There is quite a bit of risk involved, in making sure it comes down the right way. This is fire you’re working with, something that’s uncontrollable. It’s unpredictable, not like dynamite, which can be controlled. The way we cut the hole in the bottom determines what direction the chimney falls in.’ 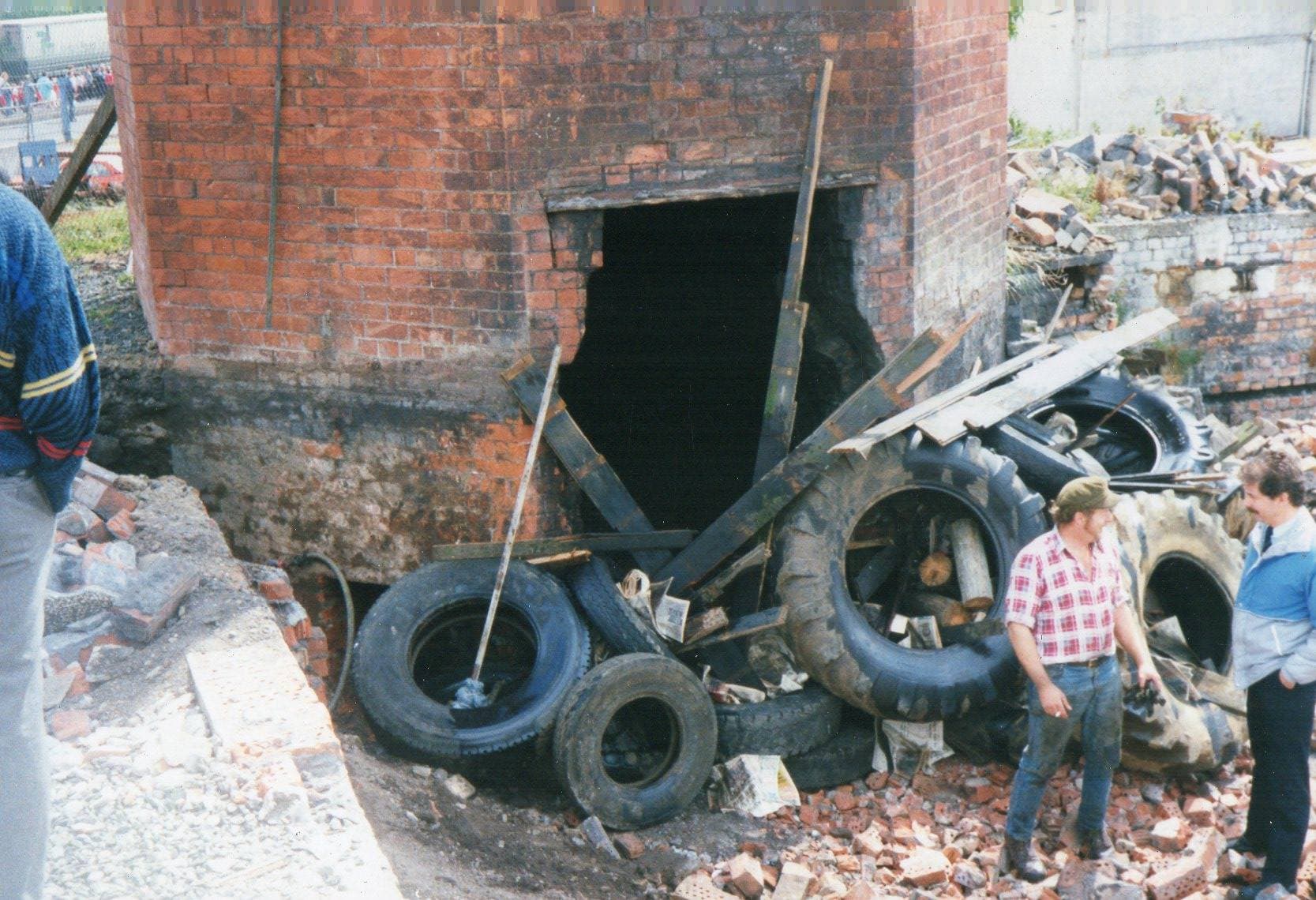 Apparently Fred Dibnah was very reticent about how much money he’d been paid to fell the chimney. On the other hand, he was quite outspoken about the taste he’d acquired for Ballyclare Guinness and as soon as the chimney was down he decided it was the only cure for the dry throat he claimed was caused by the dust.

Had it all gone according to plan? ‘Beautiful,’ beamed Fred. ‘I think we were just about five minutes out.

But Fred was quite sentimental, too, about what he was doing,

‘This little village will never be the same again,’ he lamented. ‘The whole skyline will be changed and you’ll just get a horrible collection of sheds stuck up.’

So true Mr Dibnah. So true. 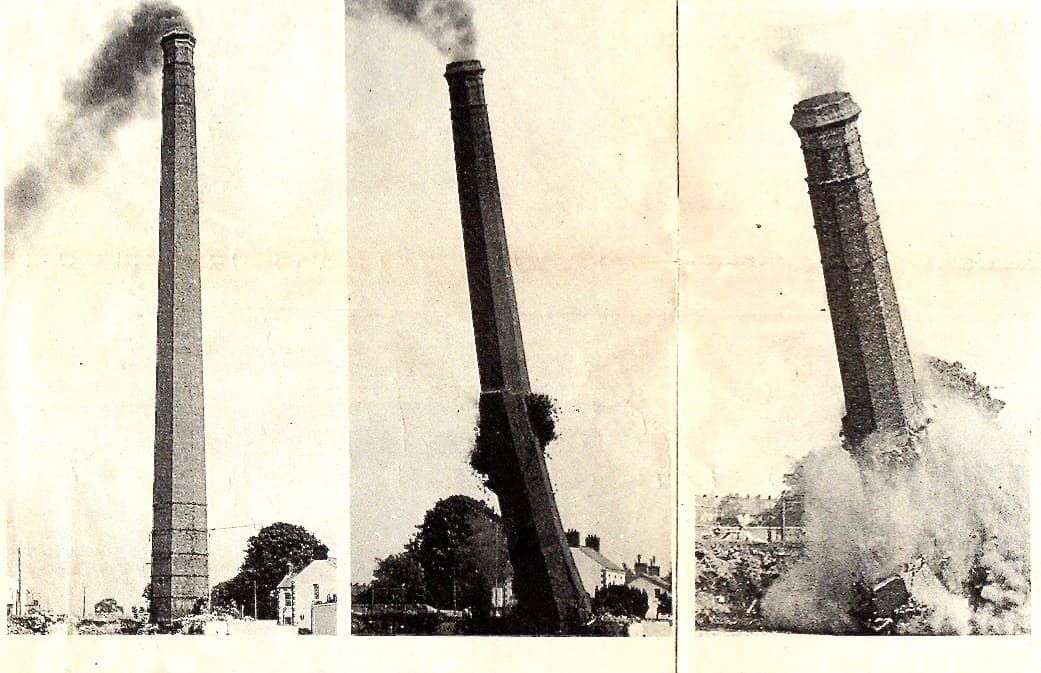 Ballyclare had been the home of papermaking in Ireland for two centuries but it was in 1875, when a company was formed by a Blackburn businessman and his friends, that the business really started to build its reputation. Under the title of The North of Ireland Paper Mills Co Limited, the company decided that its future was in producing high quality paper.

By 1897 it was importing wood pulp from Scandinavia and it wasn't long before most of the newspapers in Ireland were printed on paper made in Ballyclare! At its height the business employed over 800 people before its closure in 1951. The demise of that industry in the town was reflected in the words of some of the writers at the time of the site's final demolition

RECALLING PAPER TOWN
A poem written by a local historian, Jack McKinney from Tildarg, on the eve of the demolition.

It’s true, then, the story going round;
The Milltown chimney’s coming down;
For years it has stood serene and still,
Last remnant of our Paper Mill.
Its twin long since gone, from the New Six Mile Park
And for miles down the valley an important landmark.

Few memories remain, we’ve forgotten them all,
The Beaters, The Potchers and the girls from the Salle,
Or the teams, the Brass band and big Sports Days with runners.
Even the old fellows who would ‘kert oot the shunners’.
And, shaking like a jelly, there steeplejack who would fix
His ladders to its side and point up at the bricks.

But on Saturday night if old Joe got frisky
It was wonderful what he would do for a whiskey,
Though he knew right well that the chimney top was narrow
He’d wheel some drunk crony round there in a barrow.
To do this occasionally just for a dare
Pleased the Paper Mill workers from Ballyclare.

No more wash-ups, no more changes,
No more drinking pints in Granges,
The locals wept as the last smoke stopped
Pouring from this chimney top.
It’d be good to preserve it but instead
Someone’s gone and sent for Fred.

Tomorrow he’ll set his wood alight
And bring it down without gelignite.
It kept us working years ago
So when the mighty stack’s brought low
Let's not forget as it tumbles down
That Ballyclare was Paper Town 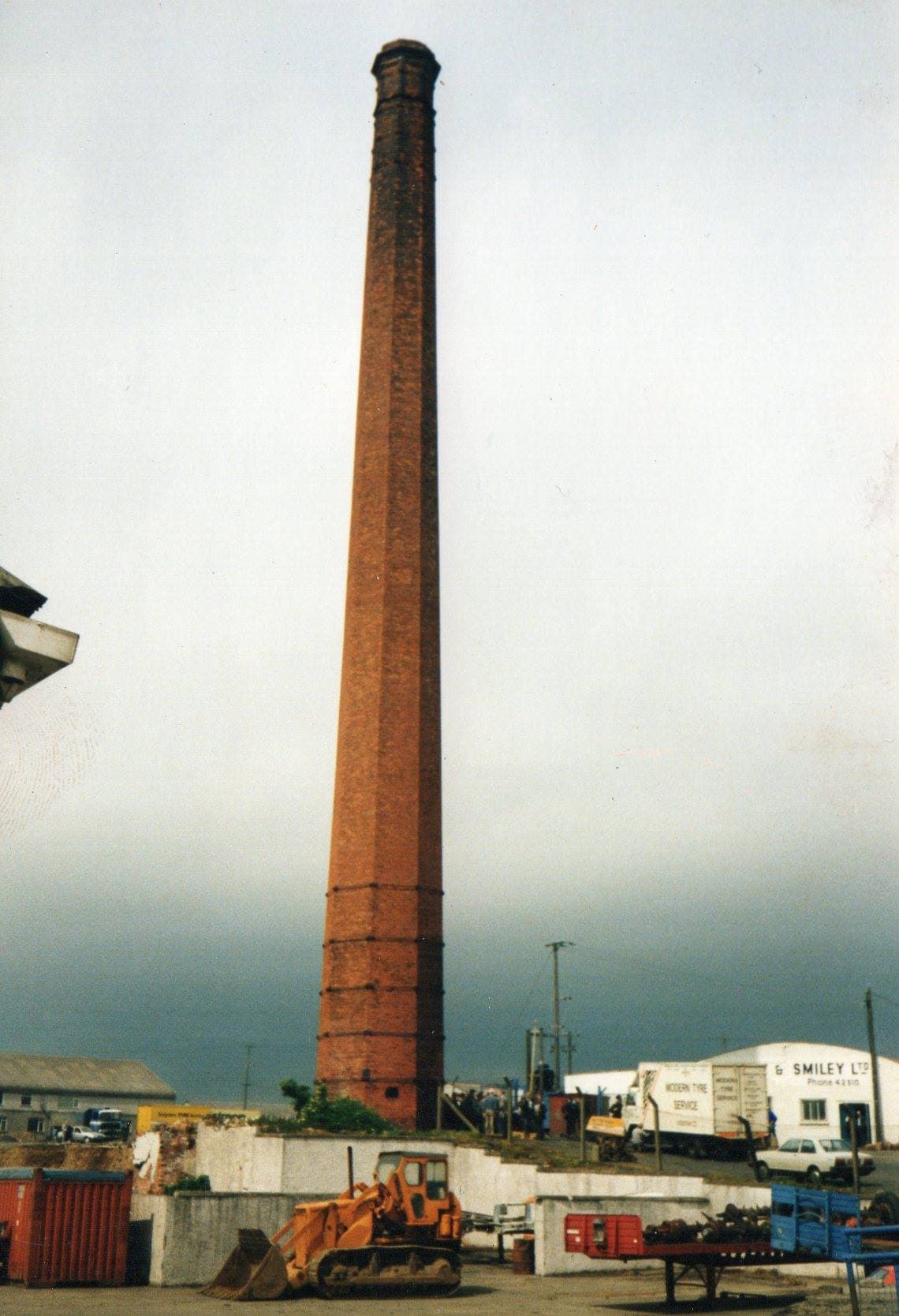 The following was also written by the Rev SL Reid at the time:

When I gave up smoking,
The old Mill chimney said,
They raked out my ashes
And let my fire go dead.
They drained my great boilers
It really was no thrill
To feel my bricks get cooler
In winter’s frosty chill.

They left me standing useless,
Viewed by the country round,
No smoky dirty washings,
In Ballyclare were found.
Oh, what sadness
To think my work is done;
I'm just a bleak reminder
Of days all past and gone.

Some people think I’m lovely.
And some would see me down,
But one thing is for certain,
This is a poorer town.
For when they write the annals
Of dear old Ballyclare,
They’ll mind the paper makers
And work that once was there.