The first international road race in Britain after the Second World War took place around Ballyrobert on Saturday 10 August 1946. The circuit was only ever used for the International Ulster Trophy Race, which had taken place in Ballyrobert in 1937 and would be held again around the course in 1947, moving to Dundrod in 1948.

The Ballyclare circuit started on the Longshot Road, running down to Lindsay’s Corner; then right towards Ballyclare and right onto the Ballyrobert Road. This became known as ‘Ballyclare Corner’ and from this point the cars travelled into Ballyrobert village, returning to the start of the race on the Longshot Road. The race course was a distance of 4 miles 250 yards, was run over 12 laps of the course with the cars averaging a speed of 55-60 mph. 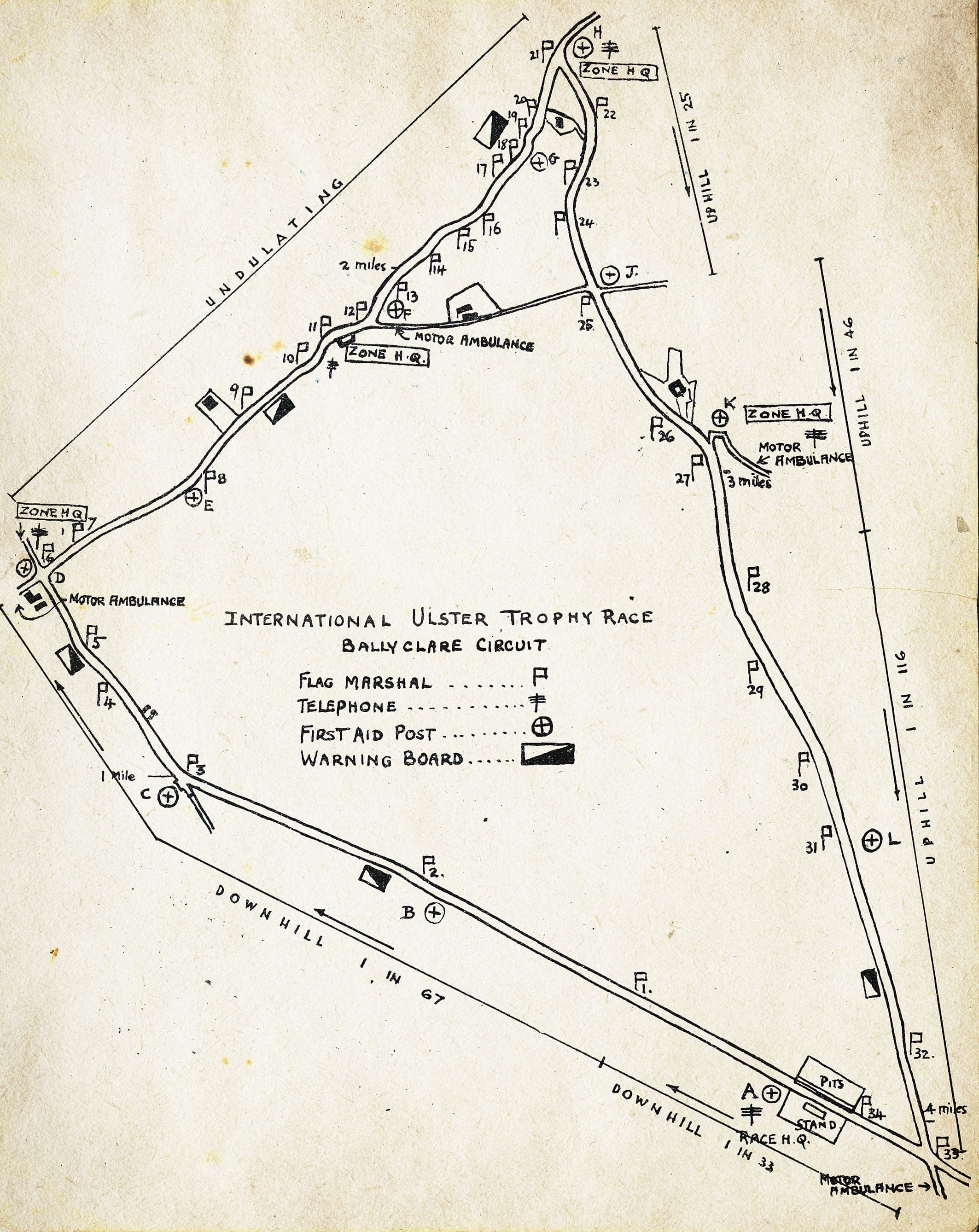 A thrilling race was eventual won by the Thai Prince Birabongse Bhanudej Bhanubandh, commonly known as Bira. You can read the Prince's life story here, from his birth in the Grand Palace in Bangkok in 1914. through his motor racing career that saw him compete in the early years of Formula One; his Olympic sailing career and aviation exploits; to his death from a heart attack alone in Barons Court tube station in London in 1985, a forgotten hero.

You can read an account of the Prince's race to glory from the Motor Sport Magazine of the time here. 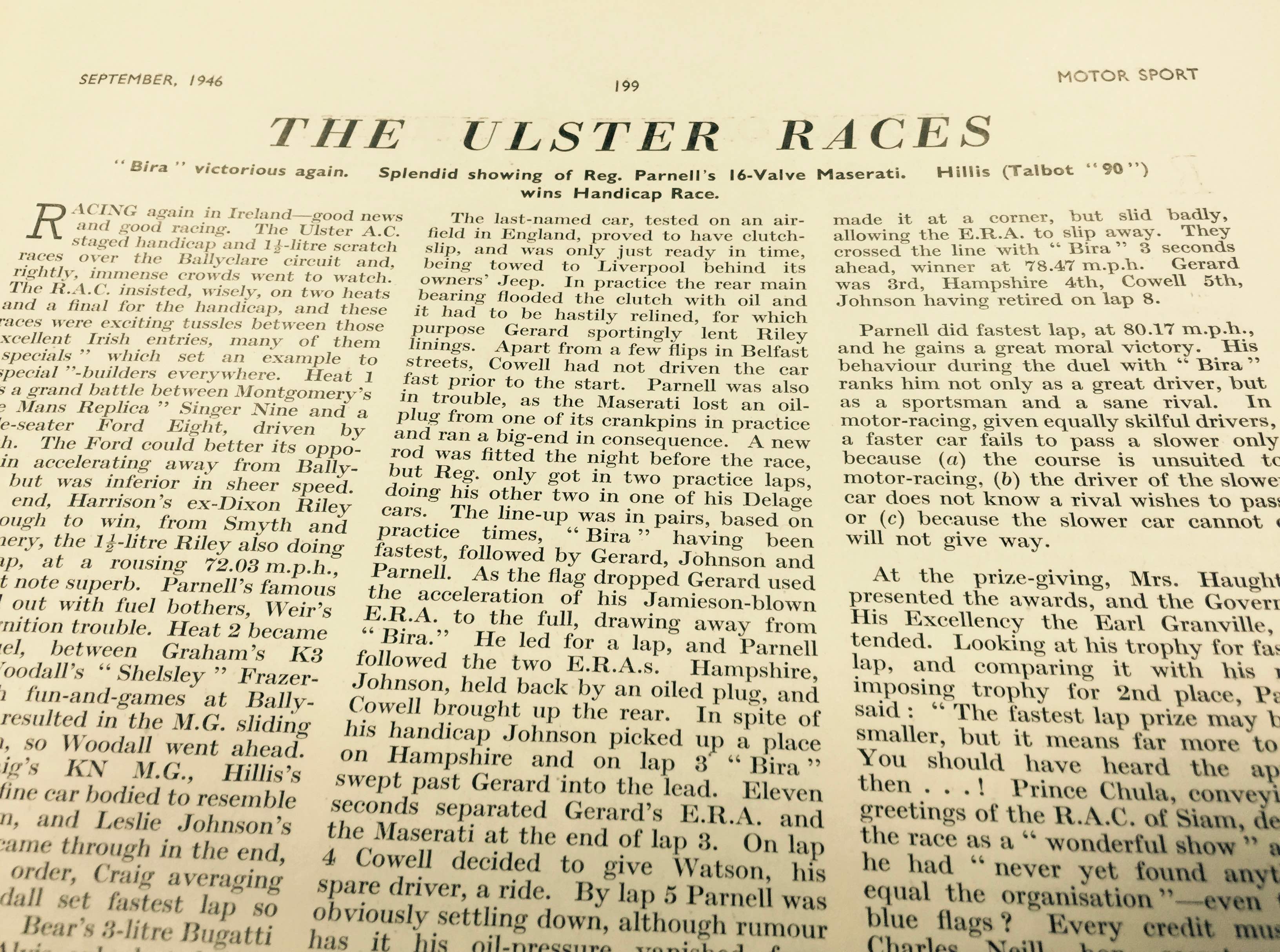 Or watch this wonderful Pathe News report from the time.

On Friday 4 May 2014, a commemorative racing car sculpture was unveiled in the village centre as a lasting legacy to the English Racing Automobiles racing car that won the race that day in 1946.

Speaking on the day, the Mayor, Alderman Fraser Agnew, who was accompanied by Mr and Mrs David Beattie from the village and Councillor Mark Cosgrove, commented:

"The sculpture makes a fantastic eyecatching feature in the village and forms part of an Environmental Improvement Scheme. Other works on the scheme include improvements to the village green such as new fencing and seating and the provision of an electricity supply.  The works not only give Ballyrobert a makeover, but also provide a great example of different partners coming together and bringing positive change to our local community. 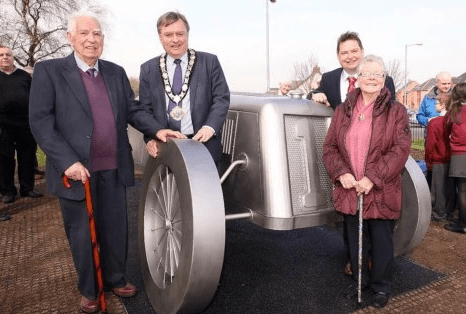 This wonderful artwork 'The Ulster Trophy Race 1946' was created by renowned English artist Raymond Groves (1913-1958) in 1946 and perfectly captures the thrill of an amazing road race all those years ago. 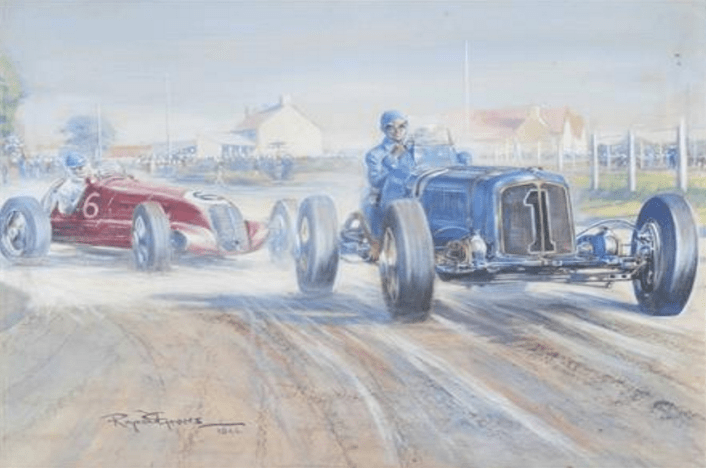 The picture below is by British artist Gordon Horner (1915-2006) and titled '1947 Ulster Trophy Race - Ballyclare'. Created for The Autocar in 1947, this pen and ink with wash heightened with white, depicts the start of the 1947 race with the eventual winner Bob Gerard and Prince Bira both in ERA B-Types leading away from John Bolster also in a B-Type and Reg Parnell in the ERA E-Type. Magical. 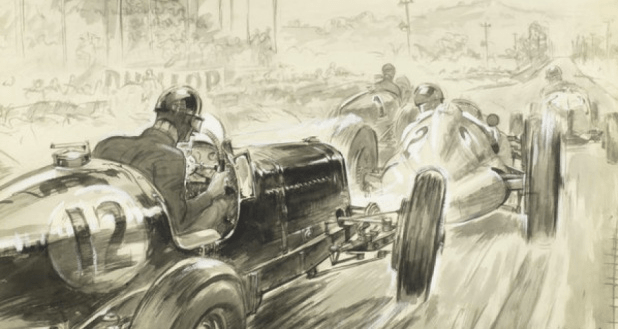 This was the original programme from the 1947 race: