If Bert McCormick can't get it, it can't be got.

If Bert McCormick can't get it, it can't be got.

As Bert McCormick celebrates his 40th year in business on Ballyclare Main Street, we thought it would be good to share this wonderful article written about the great man by Ciaran McCauley back in November 2012 for the East Antrim Gazette. It’s well worth a read. A fascinating man, an amazing career and a great Ballyclarian.

Bert McCormick may be best known locally as discerning record store owner, but his music career has taken in much more than simply selling albums.

Over fifty years in the music business can mean gaining something of a reputation. Just ask genuine Ballyclare Institution and purveyor of all things recorded music – Bert McCormick.

‘About four years ago I was in Tenerife on holiday’ he recalls. ‘And someone heard my name and asked me; Are you Bert McCormick from the radio? See – my whole name’s the reputation now’

Bert is recalling the day he first phoned in to Radio Ulster. It was about 2000 or so, and Gerry Anderson was playing a song which, after it finished, the DJ told listeners could not be found in Northern Ireland but could be ordered from England. ‘Well I was amazed,’ says Bert. ‘A local program telling people to go out of the country to get something. So I phoned Radio Ulster essentially to complain – and they put me straight through to Gerry Anderson on air! ‘I wasn’t thinking of myself at that point. I was just on to say they shouldn’t be encouraging listeners to go elsewhere to get products that are available locally, since I had them or could get them. And by the end of that day I had 75 phone calls with people asking us to get records, if we could import them from the United States...we weren’t able to supply absolutely everyone, but we supplied nearly everyone. And since then the business mushroomed.’ 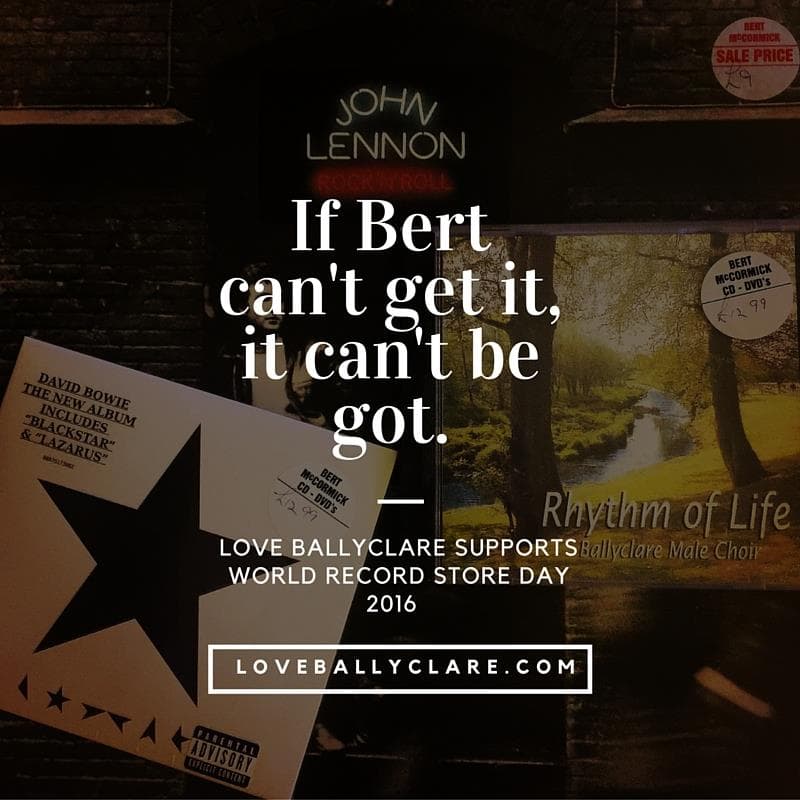 In short Bert is a man who gets things – specifically anything in music and film. His store, established since 1976, has become as ingrained into Ballyclare life as an instantly hummable tune. But more importantly, his reputation for finding even the most obscure records for discerning listeners is what has customers flocking, phoning and contacting him from all over Ireland, the UK and farther afield. And it’s not just for placing orders. ‘I even get phone calls occasionally from people asking for answers to music based crossword clues!’ he laughs. ‘Though to be fair, I wouldn’t be as up to date on my modern day stuff. I wouldn’t know what number one is right now. Would you? But if you hear a song on the radio, a classic from the 60s or 70s, you might not quite know it, but you’d be able to hum the melody of it.’

In a time when bricks and mortar record stores – eroded by digital sales – are increasingly hard to find, the likes of Bert, a fanatical musical lover with an encyclopaedic knowledge of the subject, are rarer than Antrim gold. Fortunately Bert is a man who lives music more than sells it. Born in Belfast some years ago (he, waggishly, refuses to confirm his age) Bert has led a life steeped in musical folklore – a performer in bands throughout the hey-days of Irish music – such as the Dixieland jazz craze of the 50s, the Showband era in the 60s – the music man has stories enough to fill a hefty memoir. ‘I started playing the piano when I was seven. I had a great tutor. He would teach me stuff from the radio; whatever the latest hit was, so I could play it to my friends. It ignited my love of music’

His entrance into the music business started in earnest in 1956 when, while working as a shoe seller, Bert formed a Skiffle group with some friends. ‘One of the guys played the tea chest bass and everything.’ The piano player remembers. ‘Then when Dixieland went big, we moved into that. I played in a group called the Jimmy Compton all Stars. We were big too – we played with Chris Barker, Acker Bilk. Big names but before your time! Then the Showband craze happened and we moved into that. Myself and Ivan Black – who also lives in Ballyclare - formed the Ivan Black Showband before I went on to play for the Broadway Showband. Again we played these big two band shows with major artists – Chubby Checker, Freddy and the Dreamers, Ruby Murray. Ruby was huge, she had five singles in the Top Ten at one point. It was a great era.’ 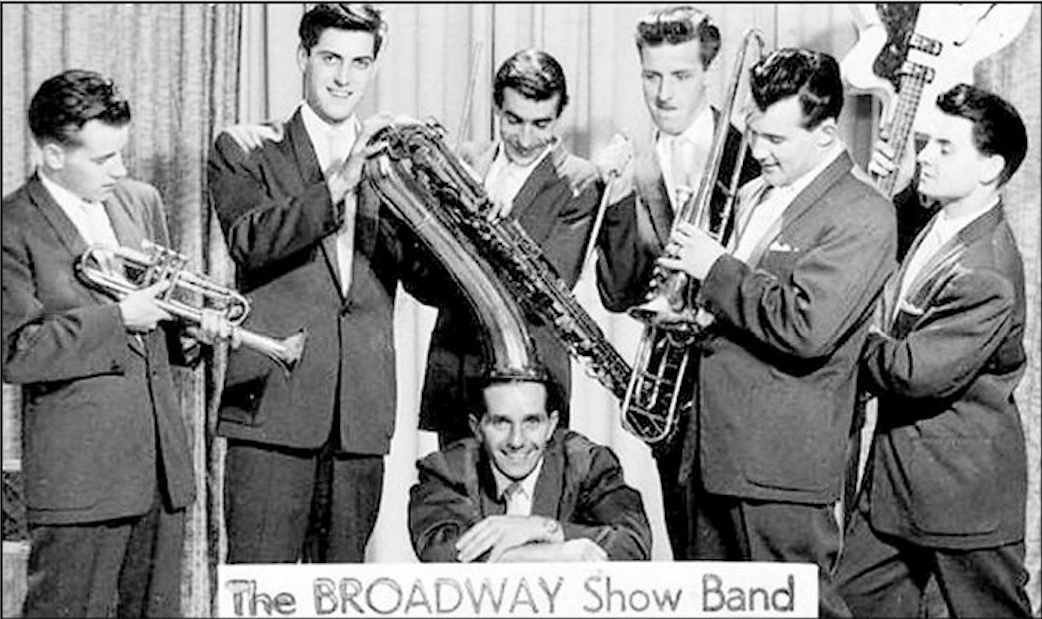 Bert even recalls a dalliance with TV fame: ‘We did nine shows on television, on a program called the Half Door Club. We were the backing band and the studio was built like a nightclub. The closest thing you’d get to it these days would be Jools Holland.’ It was around this time Bert began to look into opening a record shop. Already working for one of Northern Ireland’s biggest media wholesalers at the time, the Belfast musician was keen to fulfil a personal dream, which finally came to fruition in 1976. ‘I just happened to be passing up the Main Street here when I saw the premises was available. So I decided to finally open a record shop.’

In the meantime Bert was now juggling three gigs – record store proprietor, a full-time job as a music buyer and working as a professional musician, now as the resident band at The Chimney Corner. ‘We were called the Sessionmen, and did a kind of cabaret act which was the thing at the time. Again we had the chance to play with the likes of Cannon and Ball, Frank Carson and Roy Walker, who presented his own cabaret in Belfast at the time called ‘Talk of the town.’

Bert’s wife ran the record store day-to-day, with Bert pitching in at weekends, and the store maintained modest success until 1989 when various job changes gave him slightly more time to dedicate to the shop. However it wasn’t until 1999 and a health scare which forced the grandfather of five to leave his full- time job, that he began to concentrate on the record business. ‘I thought I’d had a stroke,’ he explained. ‘But basically the whole left side of my body kept gong limp. Even when I was playing the piano, my left hand would go dead. I went to a physio and had acupuncture – she reckoned it was a virus affecting my muscles. Either way it went on a few months.’ The change allowed Bert to go full-time at the store and resulted in a broadening of the store’s range and ultimately its establishment as the go-to for obscure records, particularly country, folk, Irish or jazz.

But in an era of record store destruction, what is the key to Bert’s longevity?

‘We’re filling a very real need for older generations of music lovers,’ he says. ‘Everything these days is geared towards the youth, so I think older people have been somewhat left behind. We fill that need for people. ‘A big problem is a lot of stores don’t have the range or knowledge. Young people work in these stores and don’t really know the product. A big seller of ours here is Gene Watson. But I know someone who went to HMV and asked if he was in stock. The answer they got was: ‘We don’t keep her.’

He smiles: we might not sell hundreds of copies of one artist, but what we stock we sell constantly. This stock is good straw as we say.’ 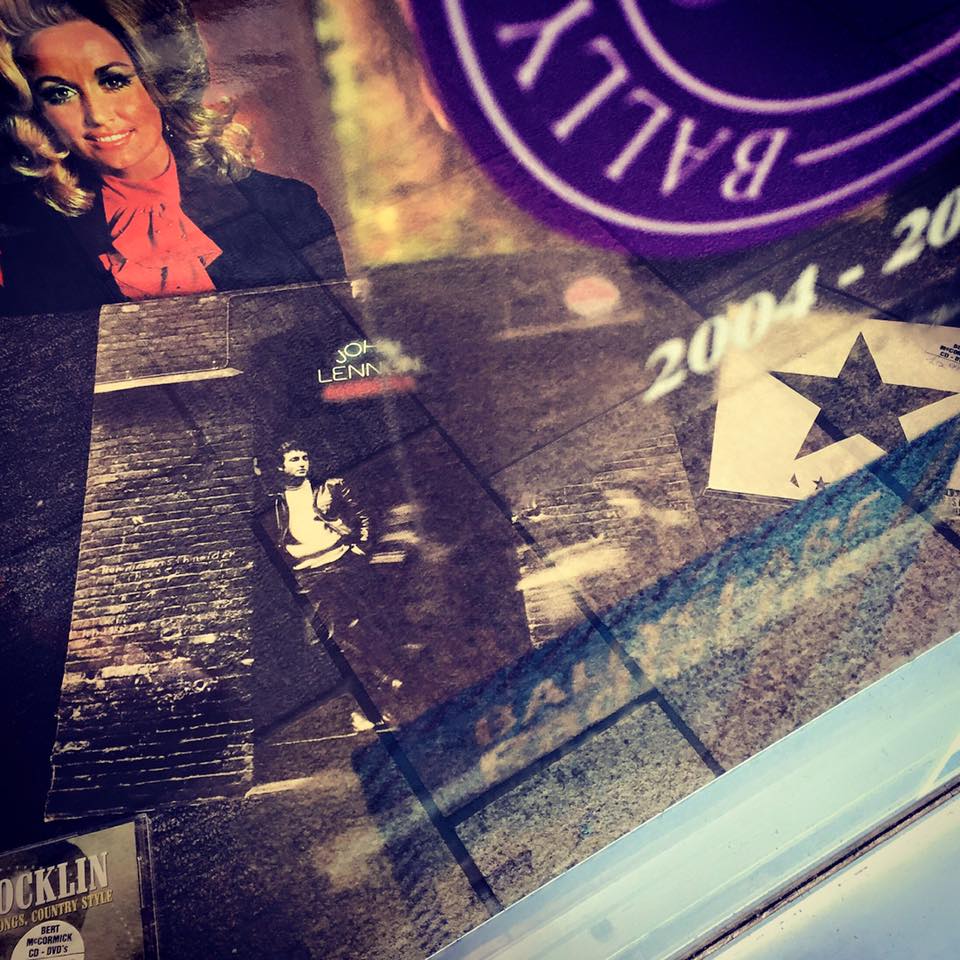 During our conversation a customer wanders in and asks Bert if he has any Raymond Froggatt – a suitably rare artist to find. Fortunately not only does the avuncular CD slinger have the album the person is also looking for, he can also recite an up-to-date itinerary of where Raymond is currently touring, what songs he’s playing and, probably, what he eats for breakfast each morning. It underlines Bert’s continued success when so many other record stores struggle or go bust. 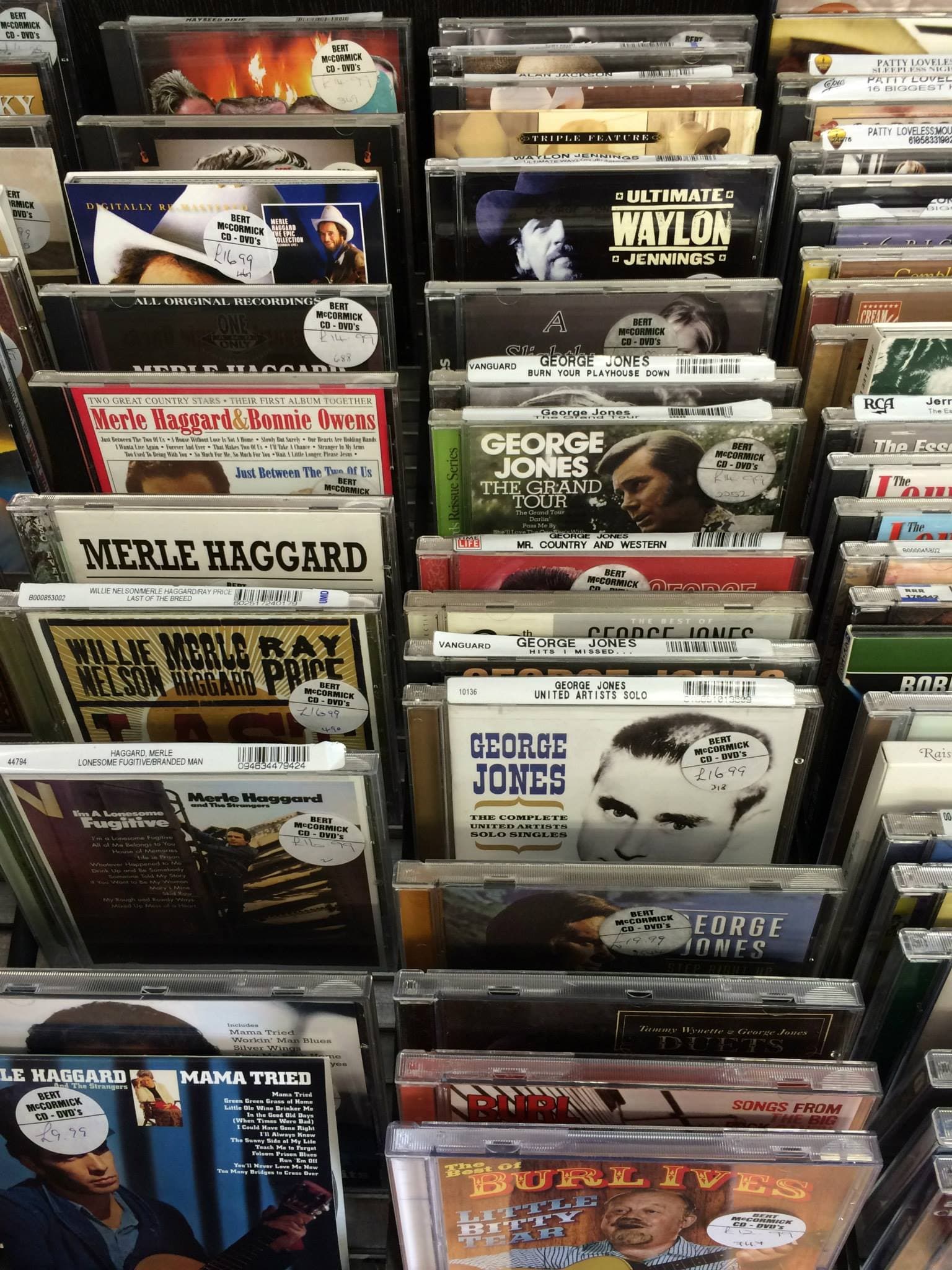 Bert also served his time as President of the Ballyclare Chamber of Trade for 11 years and has his own views on what could be done to improve the town for residents and business owners, highlighting a need for some attractive retailers to come back to Main Street.

‘ASDA has opened up the other end of town, but lessened footfall on Main Street. It’s dropped dramatically. We’re lucky because we do a lot of business via mail order. We don’t need footfall as much. But we could use someone to move into the old ASDA and bring people back down this end of town.

‘I also think Ballyclare could use a tourist attraction – perhaps something tied into its Ulster Scots heritage. It would be great to see and, I have to say, Ballyclare as a town has been very, very good to us.’

As for the future, Bert remained tight lipped even if he did admit that he was realistic about how much time he had left at the helm of the store.

‘i don’t know what I’ll do with the store. I love the business. I’d love to find a buyer who’d take it on as a going concern, for when I retire. But while I’m still fit I’ll keep running it. I swim every day to keep active – and I’ve been around the block a few times! Having worked in the music business, I’m no saint!’

Seems likely Bert has a few more songs in him yet.

Below is the legendary Jeb Library playing their self-penned anthem to Bert at the Ballyclare May Fair in 2009.

Take it away boys...