An interview with Ernest Hall, serving Ballyclare since 1967

An interview with Ernest Hall, serving Ballyclare since 1967

Ernest Hall has kitted out the men of Ballyclare and beyond for over four decades, and has no plans to step back just yet, as he told the Ballyclare Gazette’s John Monaghan back in November 2012.

It was a year synonymous with the Beatles and George Best’s stunning performance for Northern Ireland against Scotland, but for Ballyclare, 1967, saw an important – if somewhat less glamorous – landmark in the recent trading history of the town. Ernest Hall opened his first menswear shop, a business which remains at the heart of Ballyclare 45 years later, having suited and booted many men from the town and beyond and outliving both the Beatles and Best in the process.

Born and raised in Parkgate, Ernest’s love of the men’s clothing business strated early; in 1960, fresh out of school, he began working in John Robinson’s drapers shop in Ballyclare as an apprentice. It was a period which confirmed he was in the right trade. “I got to like the apprenticeship and decided to continue in that line of work,” he said. The experience prompted Ernest to set up his own shop in the town, specializing in menswear, opening his first premises on the Ballynure Road seven years after he first began as an apprentice. 1967 was a busy year indeed for Ernest, as in the space of those twelve months he also got married and bought a house. The original rent on the Ballynure Road premises back then was £3 a week – a lot of money at the time, but fair to say that rents in Ballyclare have got slightly more expensive ever since. A few other items were a tad cheaper back in 1967 as well – a suit was £17, 19 shillings and 11 pence (equivalent to a week’s salary at the time), shoes were 39 shillings and sixpence and a man’s cap cost half a crown.

“The most challenging period was when I first opened, not knowing whether it was going to be a success or not. Thankfully it went from strength to strength, but it did take a while for the business to grow,” said Ernest. Ernest has clearly been doing something right since, however. In 1967, when his store first opened, there were 16 grocer shops, 12 drapers shops and 5 furniture shops in Ballyclare, as well as two cinemas and McKeen’s ice cream shop. All have since closed, either due to retirements or trading difficulties.

Five years later, he moved to his current premises in the Square, where he has remained a firm fixture ever since. He bought the shop from Stewart’s Cash Stores, a grocer’s which had been taken over by the Crazy Prices chain and a s a result was moving out of the town. Due to the restrictions at the time for married women, Ernest’s wife, Noreen, was forced to give up her job in the bank upon getting married. She went on to work in the business, while son Alastair joined the company in 1989. Another son, Nigel, worked for a period in the business and now work’s for Craig’s hardware shop in the Main Street, which the family bought over in 2005.

Ernest explained that the family was keen to branch into a different field when they took over Craig’s. “We decided to diversify and grow the business and we saw the potential in Craig’s. Since we took over the business has been growing,” he said.

According to Ernest, the most successful period for the business was in the 1980s, as the company expanded, offering shoes and wedding hire suits for the first time. The company also offers made to measure suits, which have proved popular with customers over the years, as well as unique brands. Ernest believes the capacity to tailor for individual needs has been one of the key reasons why the business has remained, while others around them have closed. “The brands and merchandise that we stock do bring people into us. The wide choice has been a factor in the success, getting new and different stock. We have diversified into a wide range of products. We also do made to measure and that has always been appealing for people. People travel here from other parts of Northern Ireland to get fitted,” he said.“People like to have something unique to themselves. Everybody is not a stock size,” added Ernest.

As a founder member of the Chamber of Trade and a current committee member, there are few better qualified to speak about the challenges facing the town economically. Ernest believes that the biggest obstacle facing his company – and indeed other businesses in the town – is the scourge of unemployment. Three major factories in the town have closed during Ernest’s 45 years in business; Amblers, Turners Asbestos and Bedford, jobs which were never replaced. In addition, the market yard, which brought extra custom into the town, also disappeared. Those closures have left gaps which have had a domino effect for other businesses in the town. “The factory closures had a big impact upon business in the town. Unemployment has been the big change over the years,” he said. Ernest also feels that the trend towards supermarket shopping has had an effect on businesses in the town. “People go to ASDA to do a big shop and maybe feel that they have spent enough money for one day,” he said.

However, a selling point for the shops in the town centre has been through distinguishing themselves from the larger stores, according to Ernest. “Customer service, individuality and new products would be the town’s selling point. We are not selling multiple products all the same but each independent trader offers something a bit different,” he said.

Ernest remembers an era when local businessmen were well represented on Newtownabbey Council, and believes more input from local traders in council matters would be of benefit for Ballyclare, adding that he feels disappointed generally by the contributions of council and local councilors to the town. “I am disappointed that the council and the councilors have not done more for Ballyclare,” he said. “Ballyclare had a council full of local businessmen at one time and it would be better to have more business representation,” he added.

In 1973 Ballyclare’s Town Hall became the headquarters of the newly formed Newtownabbey District Council, but in 2000 the new Council headquarters were opened in Mossley Mill, removing the Council’s visible presence from the town. It was a move which Ernest believes has disadvantaged Ballyclare and left local people feeling detached from Council. “We lost the Council offices, which was a big loss to the town. The Council promised to have a presence in the town, and said that they would have an office in the town and keep it staffed, which never happened,” he said.

A familiar topic – one mentioned by various traders in the town, is again raised by Ernest when asked what he feels could attract more shoppers to the town. “Parking is a big issue. People expect to park at the shop door and they don’t want to pay for parking,” said Ernest. “Traffic is a problem. In my opinion, the one way system in the town does not work because no-one wants to give way to let people in. I remember sitting on the Chamber when they put the one way system in and Roads Service said they would come back and check on it to see if it was working and they never did. “A way of attracting more shoppers into the town would be to make more free car parking available,” he added.

There have been many changes during the years in shopping habits, but Ernest revealed that one habit still remains – a percentage of women still choose their man’s suit, although it is unclear whether this is due to women’s reportedly heightened fashion sense, or men’s general tendency to avoid choosing clothes of any nature themselves, apart from replica football shirts. Ernest estimates that roughly a quarter of his customers are women buying for their menfolk. “Women would do a lot more shopping for the men. Maybe it’s because the woman has moved on more in terms of fashion than the man has!,” he said.

Whilst not in denial that overall trading conditions in the town remain difficult, Ernest remains upbeat that local businesses can weather the current economic storm. “It is difficult. It is really down to the overall economic picture across Northern Ireland. It depends on the growth of the economy as a whole, but I would be optimistic for the future of businesses in the town. We have to be positive,” he said. 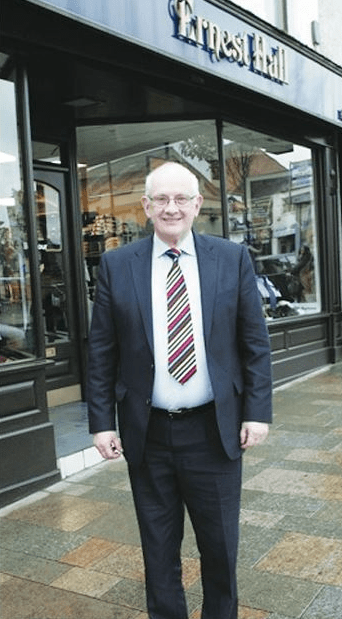 Away from work, a love of animals runs in the family. Ernest was a keen farmer in younger years, breeding pedigree charollais cattle, describing it as a hobby, a tradition carried on by Alastair, who breeds Aberdeen Angus cattle, while Nigel maintains an interest in horses.

Ernest confirmed he has no plans to slip off into retirement either now or in the forseeable future. “For as long as I am still able, I plan to be here. I started at an early age and have grown with the people. I enjoy meeting people and dealing with them, and listening to the tales of woe on occasions!,” he said.